Apple’s announcement of the iPad Pro 2018 was covered here at MCB, but no immediate plans were in place to purchase it!

Despite convincing myself not to get a new one before the last one is at least two years old, my defenses couldn’t hold on!

So, what triggered the decision to buy it?

Which model did I choose and why?

What accessories did I get?

And, importantly, how good is it?

Just last October, my thought process was, “Ok, the new iPad Pros 2018 are great. However, I’ll keep using my 10.5″ device for now as it still serves my needs very well”

And then it started to kick in… gradually!

First, I watched the live keynote on the iPad Pro. I’ve always been following Apple keynotes and I wanted to also cover the story for the Mobile Computer Blog!

My impressions at the time was that the device (especially the 11″ model) would claim the throne of the king of mobile computing. I was excited about the form factor, curious about the new Pencil, but somewhat indifferent on the Face ID addition. I also mentioned that I don’t know how long I could hold myself from buying it! Well, that defensive wall has just been breached!

And truth be told, I’m loving it!

In MCB’s coverage of the keynote event, I did mention that I was intrigued by the 12.9″ model. In reality, it is the model that initially grabbed my attention and made me seriously consider getting a new iPad Pro. The first personal impression of the 12.9″ was that the screen real estate was great, the weight was ok, and the feeling of it in the hand was very good. You could fit two full size apps in split view (unlike the iPad Pro 11″), and it makes it easier to annotate full size A4 paper documents in portrait mode. However, after handling it a couple of times, I was convinced that – for me – the 11″ is the ideal size.

In a nutshell, if you are is going to primarily use the iPad on a single desk, go for the 12.9″ model. If you plan to be very mobile with it, go for the 11″ model. For me, the device is in constant movement. It could start the day on the breakfast table, then goes with me to the university; on my office desk, to meetings, and in the classroom. It also sits on a coffee shop table depending on my schedule. For this and similar workflows, the 11″ is definitely a better option.

In terms of the other configurations, my choices were partially practical and partially frugal! I had gone for the 64 GB storage option with my 10.5″ device and I was well served, so the new one got to also have 64 GB. This is ideal for people using the device mainly with documents (educators, writers, copy writers, consultants, etc.) and augment that with cloud storage. For cellular connection, I usually skip the pricier cellular model on the premise that my phone is always with me. Right now, for example, I’m typing this on my iPad, which is connected online via a hotspot from the iPhone.

Let’s face it, the iPad Pro is not cheap!

On top of that, you do not really get the most out of it without buying a few proper accessories! (I’m sorry, you need to top up your budget a bit!)

The first thing that you would need to buy is the Apple Pencil 2 (original Apple Pencil is not compatible!). I believe that the Pencil adds tremendous value to the device, as you would be getting the ultimate digital notebook, using it to annotate/markup, and navigating the device with it.

Another essential accessory is a proper protecting cover or case. The iPad Pro is a costly tool and you don’t want to have it easily scratched or damaged. Buying a case for any iPad is not necessarily easy, but it is slightly more tricky with the new iPad Pro! I had to return two cases in a matter of days because of their unsuitability. You see, beside protecting the iPad, a proper case would have to have a provision or opening for the Apple Pencil to easily hook and charge. The case would also need to have at least one typing stand position and another for note-taking/annotating. Eventually for me, I got Apple’s Smart Folio case. It is a bit pricy (of course!), but it ticks all the boxes and it is of high quality. An excellent alternative that isn’t available in my area is the Moshi VersaCover case! 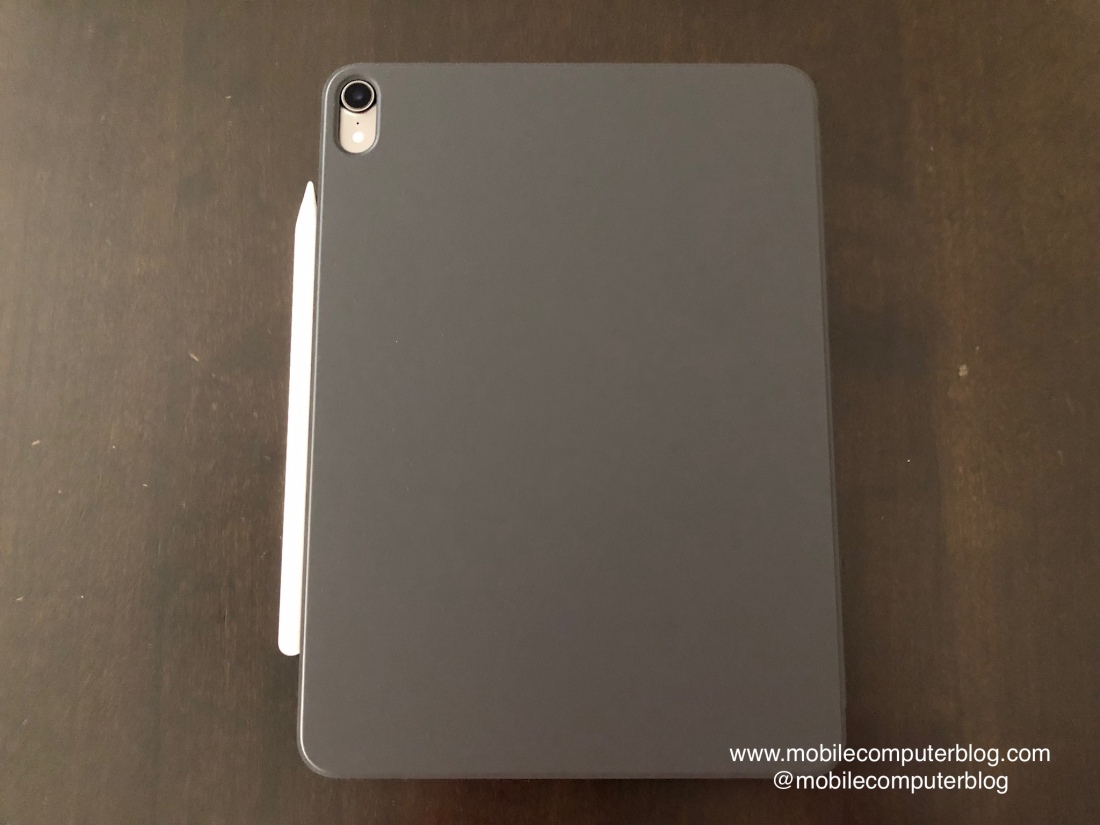 Next, and in order to make the iPad a proper laptop replacement, you need to get a physical keyboard. One obvious option is to buy Apple’s keyboard folio case (which would also function as a protective case). For me, I prefer a special kind of keyboard; one that is a bit more ergonomic, and one that could be placed in front of the iPad for a flexible input position. My preferred choice here is Kanex Foldable MiniKeyboard, which I had previously purchased and I’ve been using on my previous iPad.

Lastly, in order to be able to use the iPad as my presentation device and because it has USB-C instead of Lightning port, I needed to get a new HDMI/VGA adapter. I got one that could also host USB drives (in the hope for future software support!).

Put together, the additional accessories’ expense on top of the iPad’s cost was over 100 Rials ($260)! This is a real investment in a real workhorse!

# Moving from the older iPad

The excitement of getting a new device could get ahead of me sometimes, but it was important to ensure a smooth transition from the old device. After all, the iPad is my main computing device and it needs to be ready and set up well.

The normal steps here are:

– Setting up the new iPad from the most recent backup (on iCloud or Mac).

– Using the new iPad for a couple of days while having the older one on hold (not wiped out yet!). This was helpful in enabling some settings and verifying some data. I had to do some further setups for email accounts and apps like OmniFocus, FileBrowser (cloud folders), and WordPress. DevonThink was the most demanding of my time and attention in making a successful transition.

– Once the new device is nicely settled, the older one gets to be reset. You could then do one of three things: sell it, pass it on to someone, or re-purpose it for another use.

Compared to the 10.5″ iPad (which has been an excellent mobile computer), the new iPad is doing very well so far. You get the confidence of using a modern and powerful device. It feels more organic as well; the rounded screen corners and the overall handling experience is more cohesive. The end result is an increase in productivity and work satisfaction. 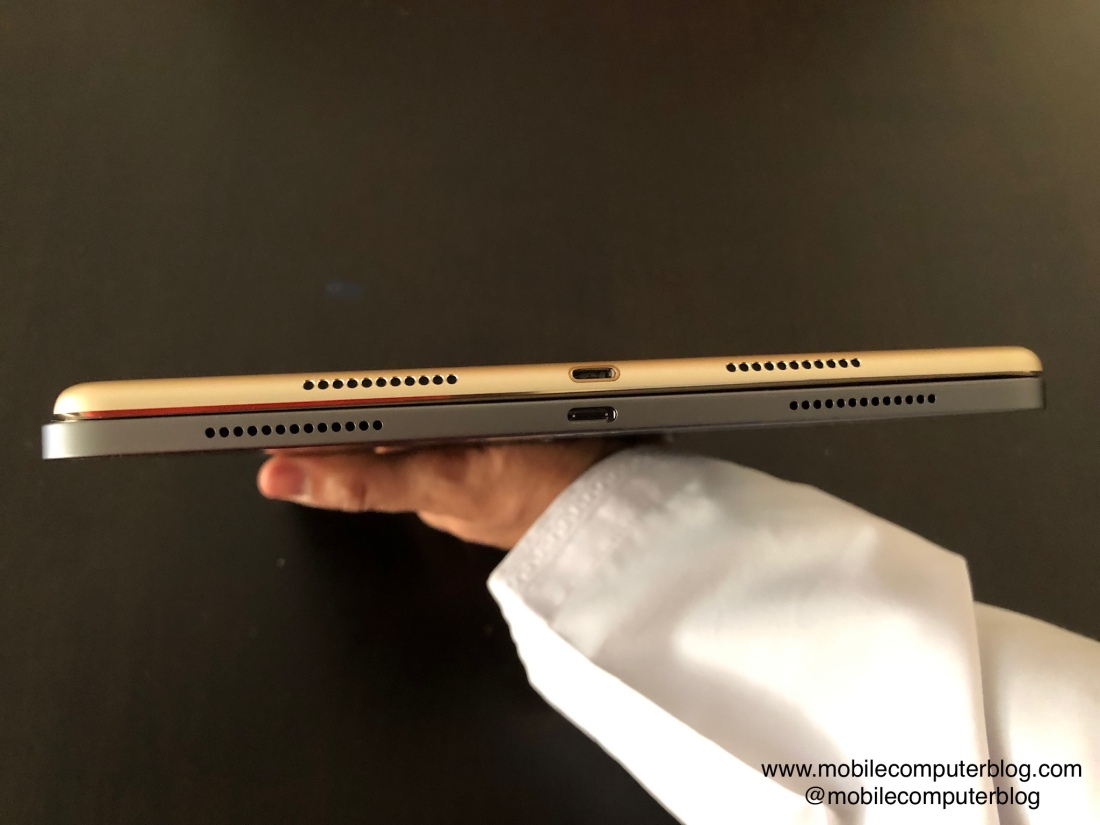 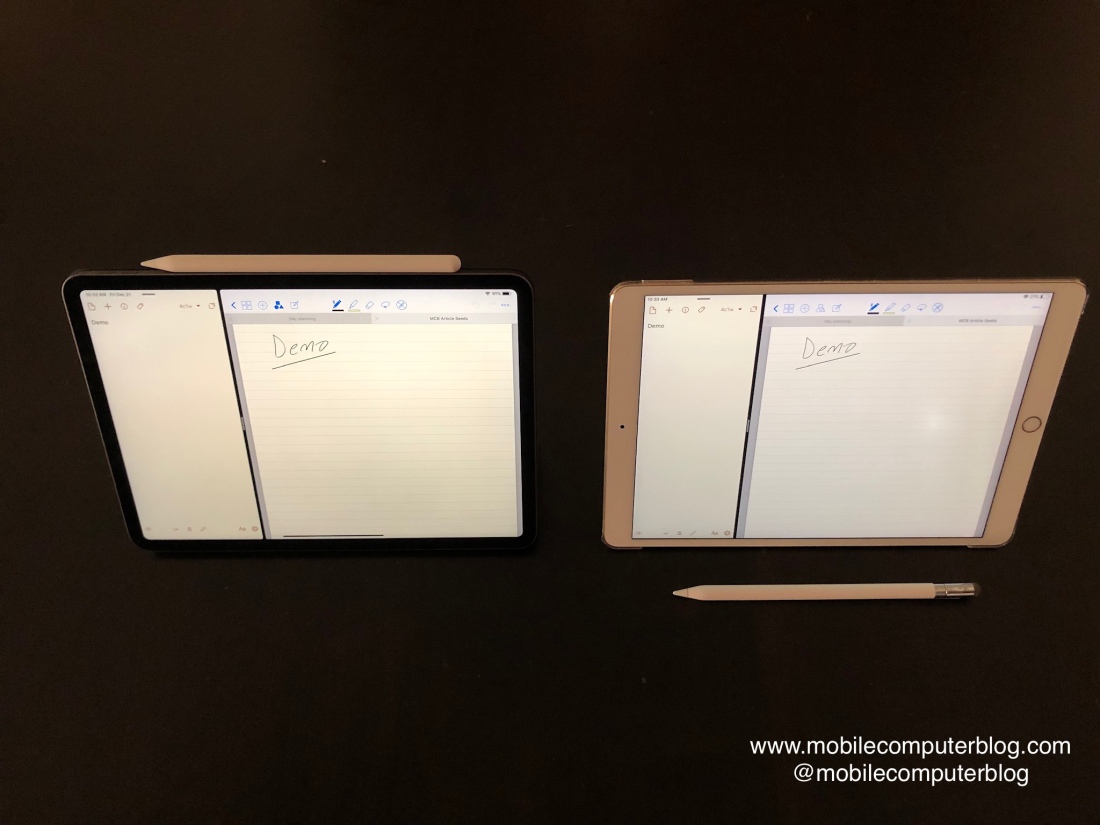 The Apple Pencil 2 got one important addition; You could now have it magnetically attached to and wirelessly charged on the iPad. This is definitely better than the implementation on previous devices. The texture of the Pencil 2 is also noticeably better and closer in feel to a traditional pencil. Lastly, it has a nice double tap feature that allows it to interchange between writing and erasing mode. This has been helpful so far.

The new design (sans home screen) is more modern and comes with changes in user interaction. Honestly, though, getting used to it was straight forward, since Apple has already trained the users on using the new swiping gestures with iOS 12.

Of course, no device is perfect. The first issue with the new iPad Pro devices is that they are expensive (factoring in the additional accessories as well). If you’re going to use it for serious work, then it is well worth the money. If, however, you’re only going to use it for basic browsing and photo viewing, it would be better to get the regular iPad 2018 for half the price.

The other important disadvantage that I personally faced is that, with the absence of the home button, you would need to invoke Siri via the Sleep/Wake button. The problem here is that I had gotten used to invoke Siri from my bluetooth keyboard by clicking and holding the Homescreen-designated button (on the keyboard). I could then immediately enter a new inbox item to OmniFocus, trigger a shortcut, or ask Siri something. Unfortunately, I cannot do that with the new model!! I do hope that I could find a workaround soon.

In general, the new iPad Pro 2018 is just fantastic! It is the best iteration yet of the iPad and, in my opinion, the best mobile computer in the market by far.

For the near future, if the rumors are true, it appears that we haven’t yet seen the full potential of these devices. iOS 13 would probably bring over additional advancements, particularly related to the USB-C port. Support for external USB storage devices is reasonably expected, and perhaps support for wider USB-C usages as well.

In the meantime, however, the new iPad Pro 2018 has already taken the iPad to a higher level, both in terms of ability and mobility. Happy computing times are ahead!

Educator, blogger, and a tech enthusiast. View all posts by haz..